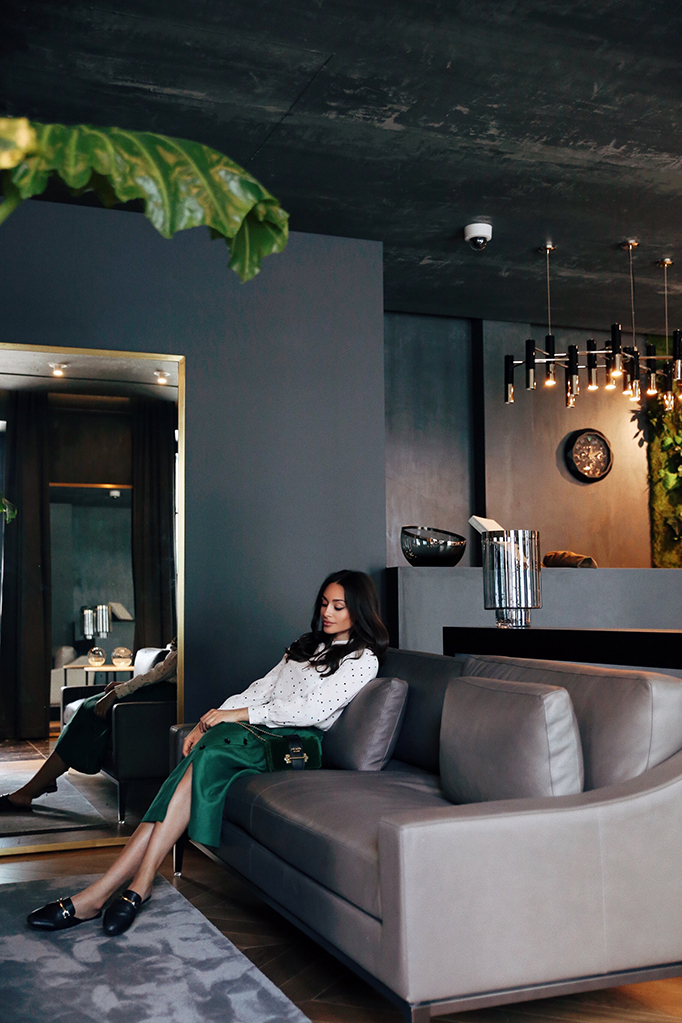 A couple of weekends ago the fiancé and I took a little trip to Lithuania for business. It was only one short meeting to be had but since we'd drive all the way there, we decided to pick one town to stay in and explore over the weekend.

Now I'm not going to lie, both him and I felt rather skeptical about the country in general, which we later agreed to have been an unreasonable prejudice. We made a stopover in Riga, Latvia for the night and continued our journey to Vilnius first thing in the morning. 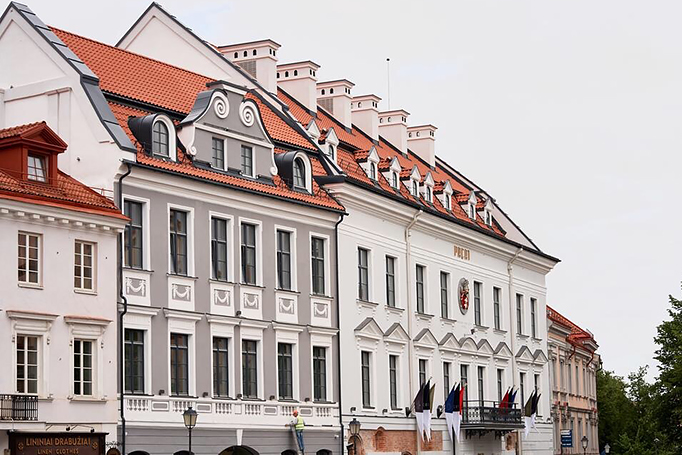 We booked a hotel whilst driving, based purely on the interior pictures. The thing is, we are in the process of decorating our new home and PACAI hotel in Vilnius appeared to be just what we were after in terms of home inspiration. 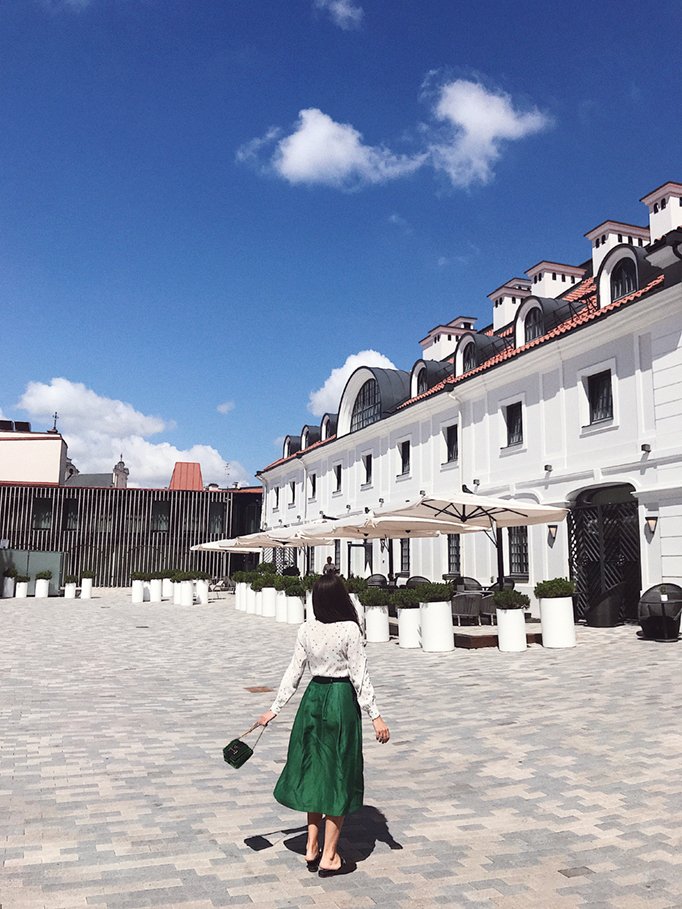 As we were approaching our location in the Old Town, our excitement was growing. What we saw were beautiful neat streets, rather impressive buildings, majestic churches and lots of greenery. A classical baltic capital at its best; and as my Estonian boyfriend would later regretfully admit, perhaps even more beautiful than our one!

But it was time to check-in upon our arrival... 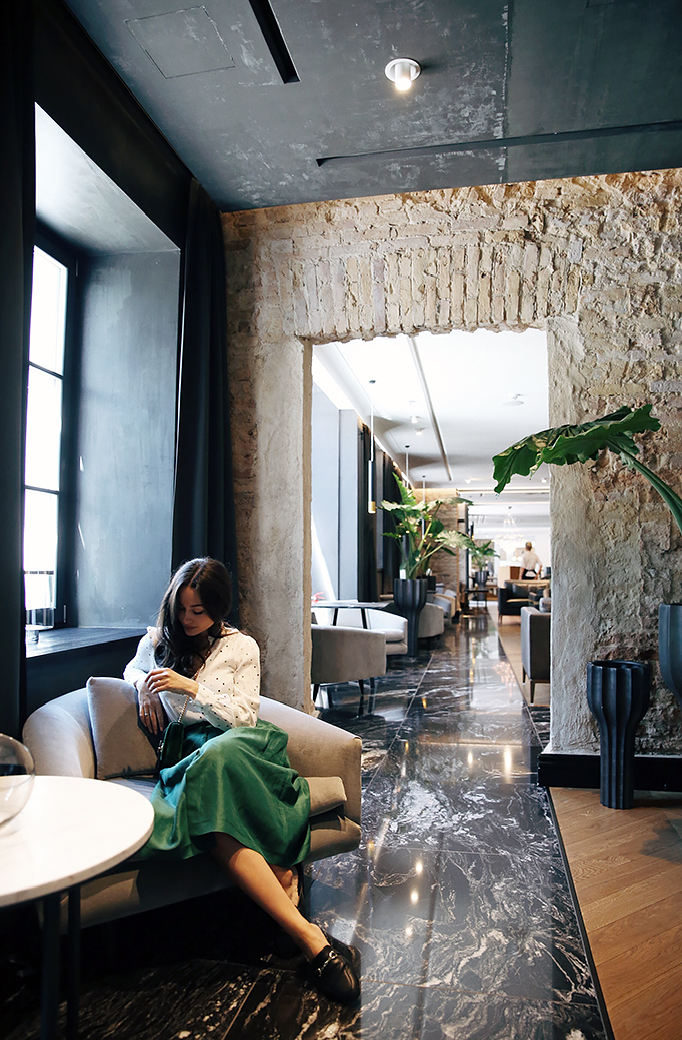 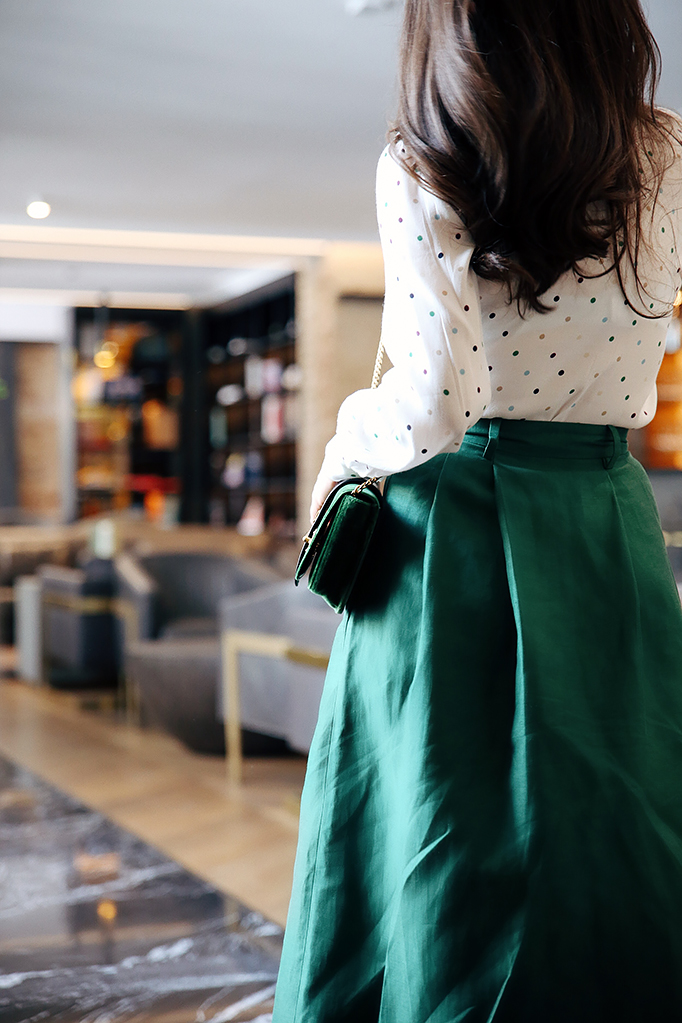 Now I did take some iPhone snaps of our room but these borrowed professional images will surely do the hotel more justice... 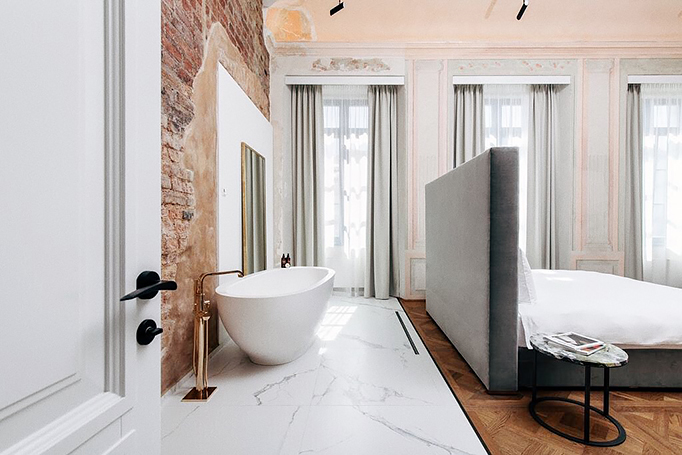 We won't have bricks in our interior but white marble bathroom with freestanding bath and elegant brushed metal accessories are high up on the list. 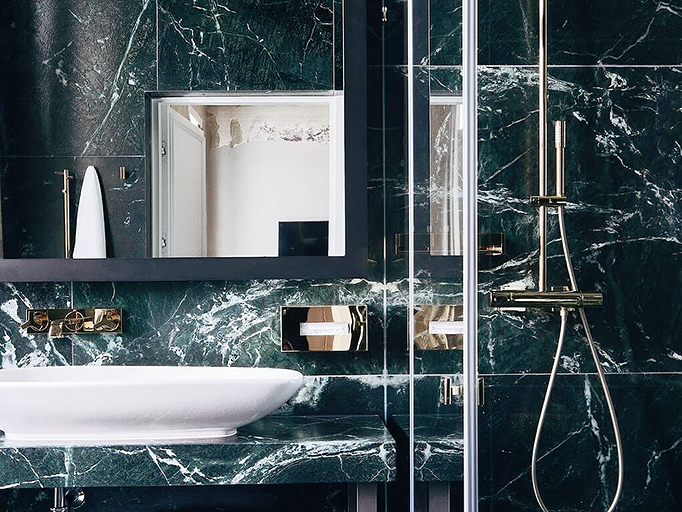 Having seen chevron parquet in a hotel's finished interior only reassured us we've made the right choice. Can't wait to see ours within a complete picture! 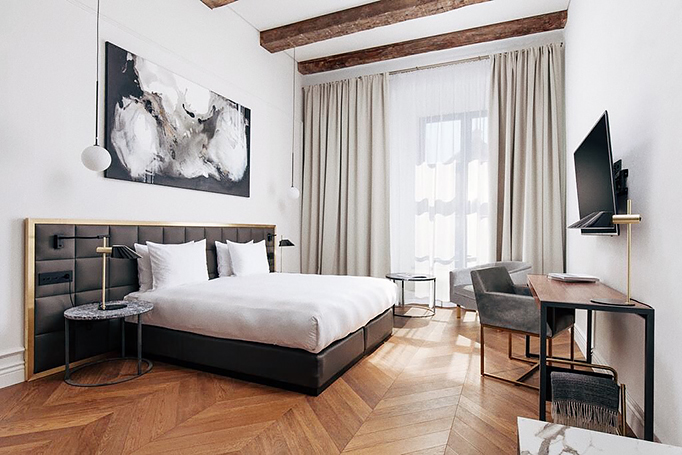 What's in here, you may wonder? Light switches! The mister and I are on the new mission of finding similar... 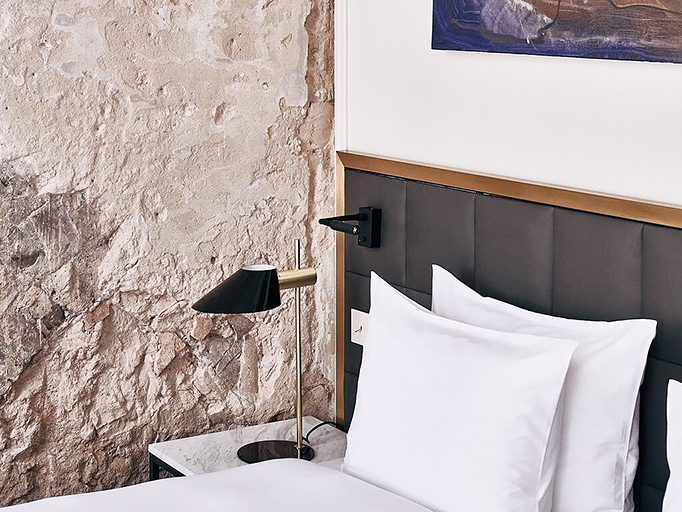 Either way, after dropping off our bags at the hotel, it was only right to head out for a meal in one of the local restaurants. 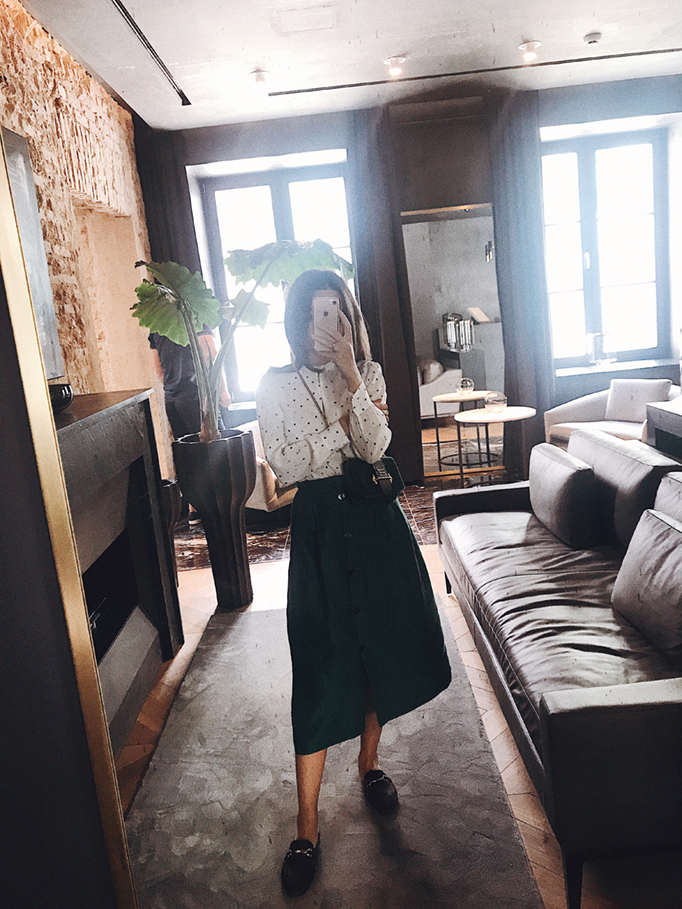 I wore Massimo Dutti combo- polka dot blouse (alternatives: the cheapest, pricier, the most pricey) and midi skirt (from cheapest: one, two, three, four, five), that I picked up on sale a few weeks ago. 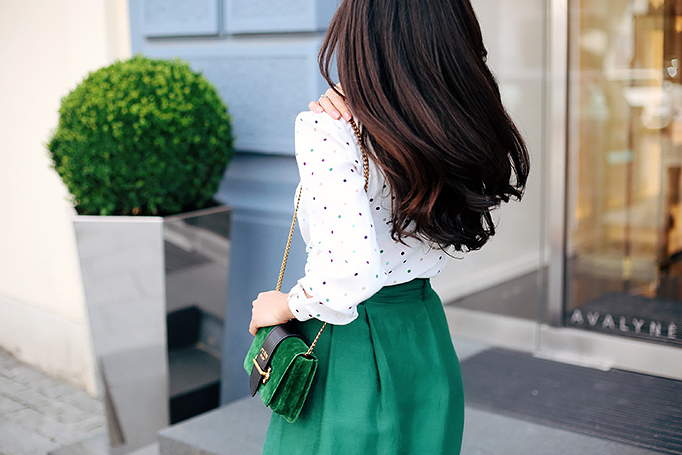 Playing it matchy with my Prada velvet belt bag, this time worn on a chain. The real thing has been sold out both in stores and online since last year and it took me a while to find it (which happened to be in Lisbon!) so I've picked some velvety alternatives. High-street options one and two and brands: fuschia or jewel-blue Gucci, Miu Miu and another Prada model. 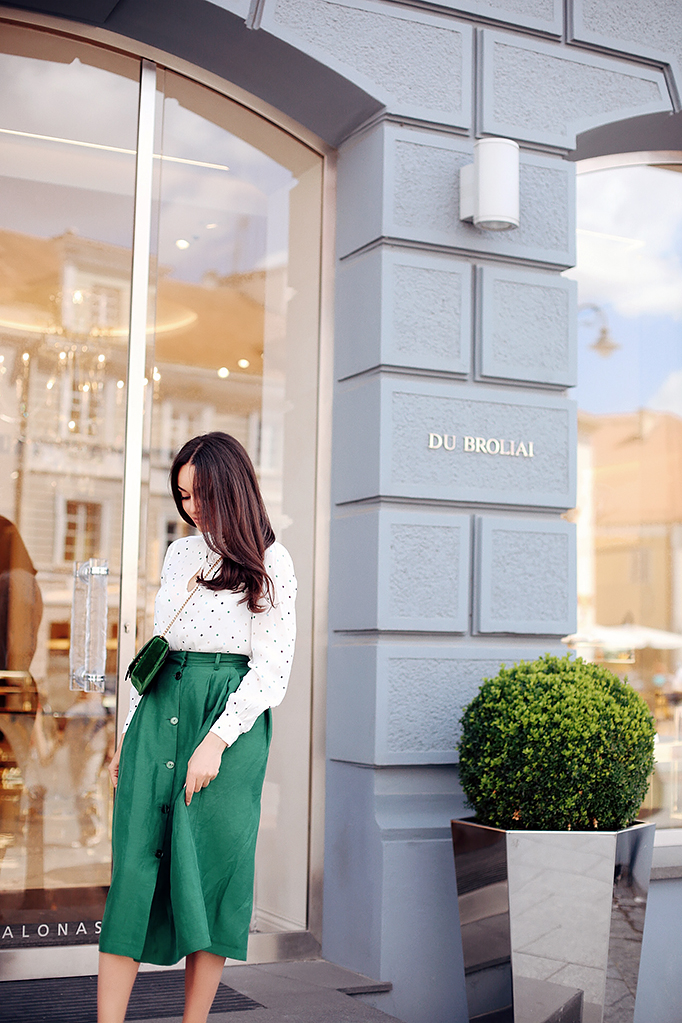 Mule loafers have completed the look just because I can't be bothered to compromise my comfort in the name of good pictures anymore, especially when travelling. 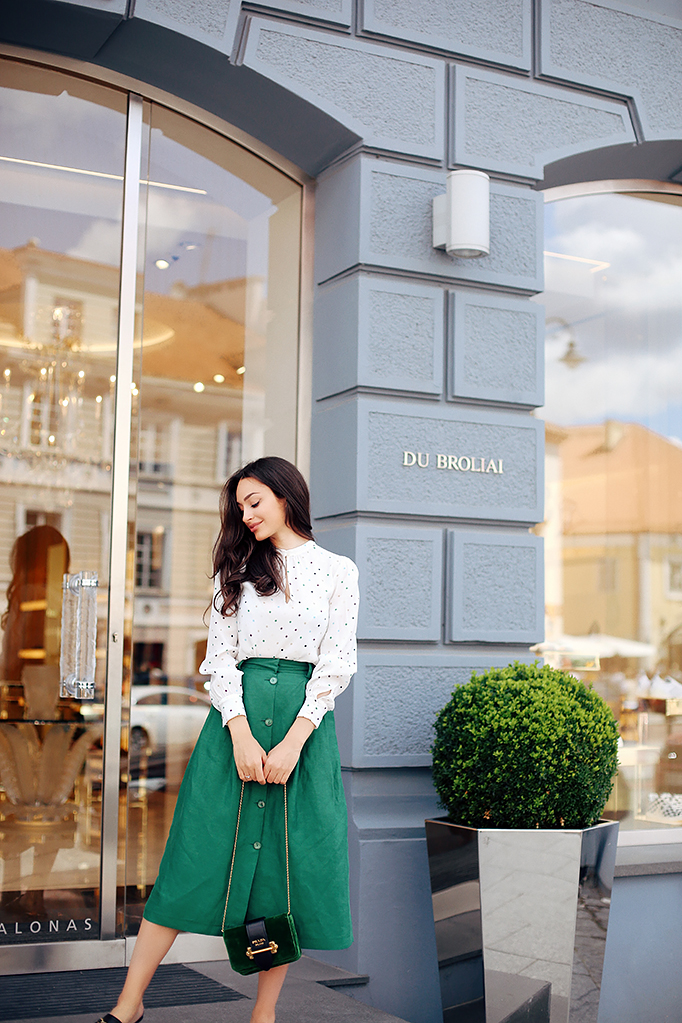 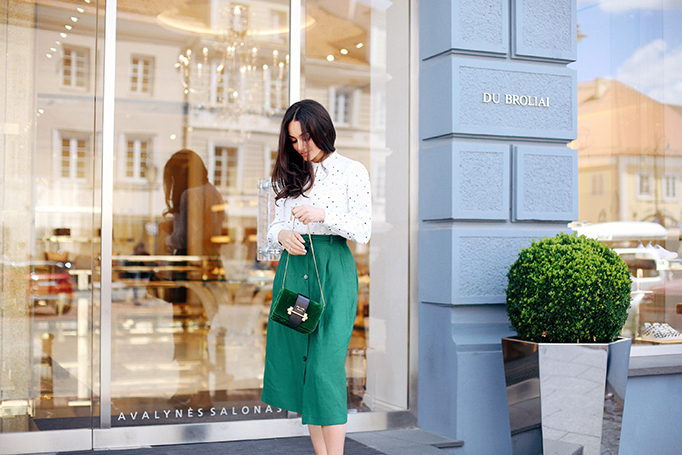 That is because we usually walk around a lot wherever we go and that day was not an exception. Hand in hand we casually strolled down the streets of the Old Town and city centre taking in all of their beauty and chatting the evening away... 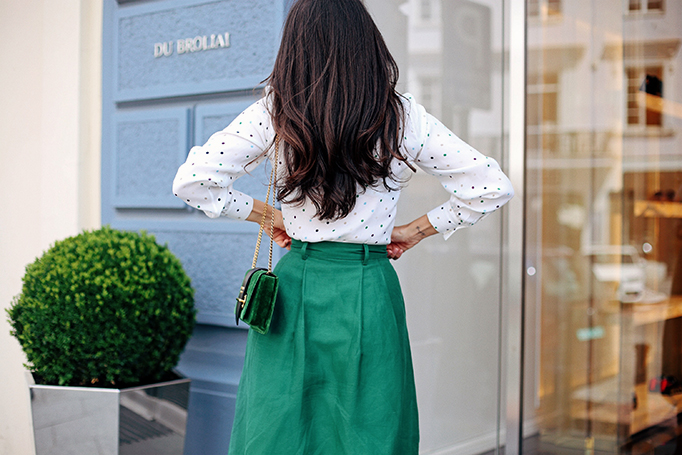 ...until it got pretty late and it was time to return to our hotel, only to get a good night sleep and explore more the next day! 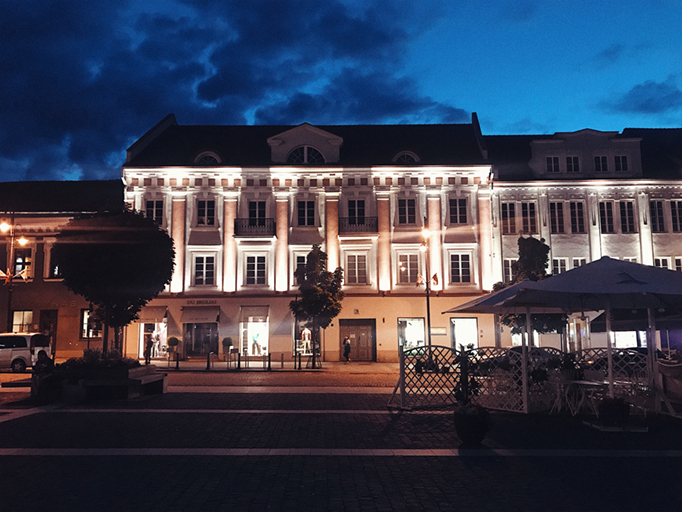 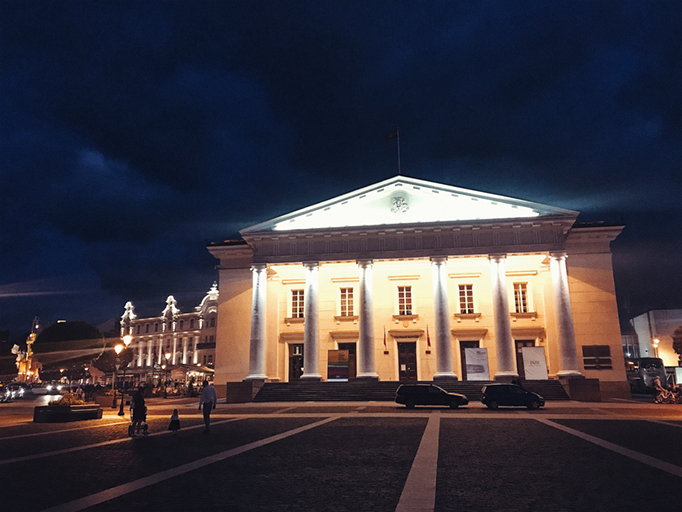